Whenever a bug or vulnerability is detected in the Linux kernel, the kernel developers will endeavour to fix it by introducing a patch into the mainline version of the Linux kernel source tree. However, many users run older “stable” versions of Linux, meaning that the patch should also be “backported” to one or more of these older kernel versions. This process is error-prone and there is usually a long delay in publishing the backported patch. Based on an empirical study, we show that around 8% of all commits submitted to Linux mainline are backported to older versions, but often more than one month elapses before the backport is available. Hence, we propose a patch backporting technique that can automatically transfer patches from the mainline version of Linux into older stable versions. Our approach first synthesizes a partial transformation rule based on a Linux mainline patch. This rule can then be generalized by analysing the alignment between the mainline and target versions. The generalized rule is then applied to the target version to produce a backported patch. We have implemented our transformation technique in a tool called FixMorph and evaluated it on 350 Linux mainline patches. FixMorph correctly backports 75.1% of them. Compared to existing techniques, FixMorph improves both the precision and recall in backporting patches. Apart from automation of software maintenance tasks, patch backporting helps in reducing the exposure to known security vulnerabilities which have not been fixed. 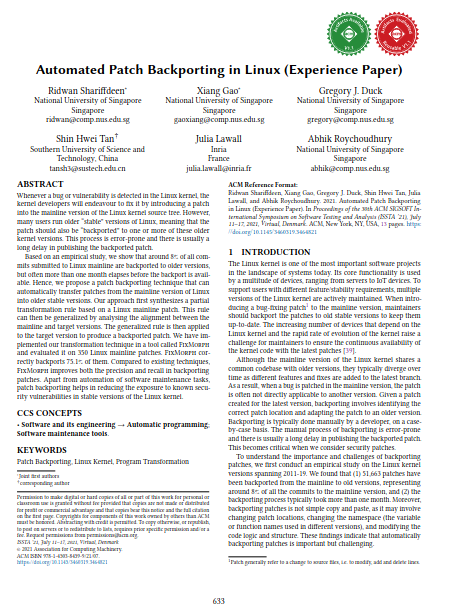 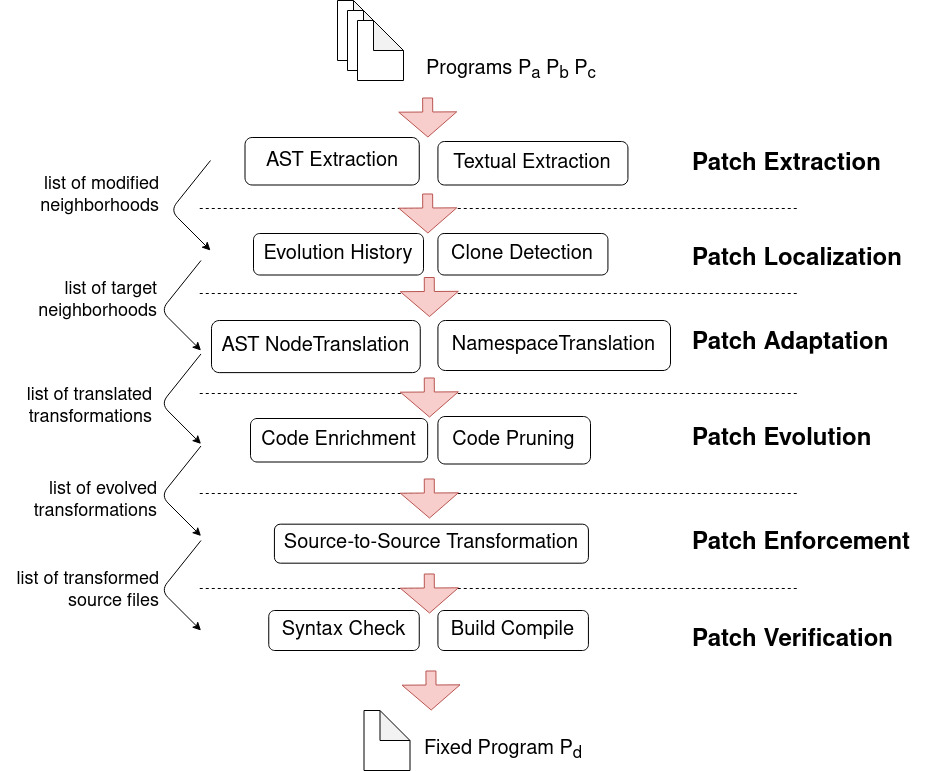 Implemented in Python and C++, this github repository contains the source for FixMorph and the scripts for the data sets, including test suites, that we used for our experiments.

To investigate the patch backporting effort required for a developer, we manually inspect the backported patches. We choose to study only the patches backported from a specific version (i.e., v3.8). We label commits based on the difficulty of backporting using the classification specified in the paper.

Using the same criteria above we randomly selected 30 patches that fix CVEs reported during 2014-2019. Note that the 30 CVE patches are disjoint from the 350 patches in our main dataset.

We compare FixMorph performance with Linux Diff utilities and our own implementation of SYDIT. A gist of the results from our evaluation is given below, for full set of details please refer the paper. All experiments are conducted on a Dell Power Edge R530 withIntel(R) Xeon(R)CPU E5-2660 processor and 64GB RAM.

We provide a replication package for our experiments with FixMorph on the selected data-set in a Docker container, which consists of setup scripts/configuration files to re-run the experiments. The Docker environment consists of all dependencies for FixMorph, LLVM, and other dependencies to build the programs in our data-set.

We list below the following artifacts for some of the experiment in our evaluation section of the paper; the developer patch from the mainline, the generated patch by FixMorph for the target, and the manually ported patch by developer.